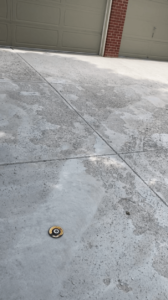 The term “spalled” has recently joined the American lexicon to describe a concrete surface that is flaking and peeling.  Its original definition as a transitive verb means “to break up or reduce by or as if by chipping with a hammer” (www.merriam-webster.com).  Now, if you hear the word “spalled” to describe your exterior concrete, don’t ignore it – it means your concrete needs attended to … and the sooner, the better!

Spalled concrete generally looks like the topcoat of your concrete slab is missing.  You can see chips in the concrete as well as exposed aggregate (the gravel rock put into the concrete mixture when it was originally poured).  There will probably be a powdery residue around the spalled areas.  The more the concrete deteriorates from spalling, the more your concrete surface will look like someone dumped a bunch of fine gravel on it.  And, once spalling starts, it degrades fast because the first line of defense – the topcoat of the concrete – is now gone and water is getting underneath what is left and wreaking havoc with your slab.  It’s only a matter of time before the entire top will break apart and degradation of your slab is accelerated.

Causes of spalling are numerous – bad mix design and improper finishing techniques at the time of the original pour are the most common culprits.  Use of deicing salts in the winter can aggravate a seemingly small spall problem and turn it into a big one.  Freeze/thaw cycles, which cause water in the concrete to expand creating pressure that breaks a weak top layer of concrete, exacerbates spalling. 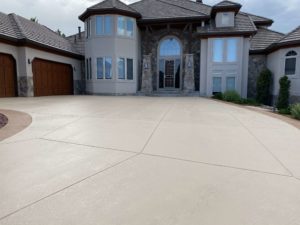 Can spalled concrete be fixed without having to replace the entire slab?   Yes!  As long as it is properly repaired before too much damage has been done.  If the slab has severely degraded, your only fix may be tearing it out and getting a new slab.  If you see signs of spalling, please give us a call.  We’re in the business of concrete repair and restoration and we can help!

This website uses cookies to improve your experience while you navigate through the website. Out of these cookies, the cookies that are categorized as necessary are stored on your browser as they are essential for the working of basic functionalities of the website. We also use third-party cookies that help us analyze and understand how you use this website. These cookies will be stored in your browser only with your consent. You also have the option to opt-out of these cookies. But opting out of some of these cookies may have an effect on your browsing experience.
Necessary Always Enabled
Necessary cookies are absolutely essential for the website to function properly. This category only includes cookies that ensures basic functionalities and security features of the website. These cookies do not store any personal information.
Non-necessary
Any cookies that may not be particularly necessary for the website to function and is used specifically to collect user personal data via analytics, ads, other embedded contents are termed as non-necessary cookies. It is mandatory to procure user consent prior to running these cookies on your website.
SAVE & ACCEPT